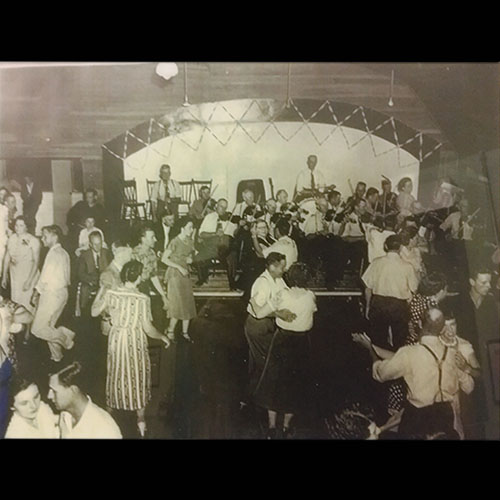 Alongside the rise of the big band era, was the establishment of dance halls or pavilions across North America.  By the 1930s dance halls were a main stay in the social lives of teenagers and young adults, who flocked to hear the latest in live music, dance and socialize.   Bruce County had several dance pavilions, most located down the Lake Huron coast which were popular with locals, cottagers, and tourists.  Several of Bruce County’s dance pavilions were owned or run by those who had musical experience with bands, or were still actively working in a band, such as Wally Scott of the Sauble Beach Pavilion, and George Scott of the Inverhuron Pavilion.

Officially opening June 28, 1924, the Cedar Crescent Casino was a long-standing landmark of Port Elgin’s beach.  The dance hall was built by William Brigden and O.E. Boehmer, and originally operated as the Port Elgin Amusement Company.  Throughout the 1930s, jitney dancing was popular – a practice of people purchasing tickets that were redeemed per dance.  The cost of admission was 15 cents and 5 cents for each dance.  During the Second World War, dancing was reduced from six to three nights a week.

In 1945 the business was purchased by Emmett McGrath who had previously played saxophone with the Ferde Mowry Orchestra, the house band at Toronto’s Embassy Club on Bloor St.  McGrath only allowed bands who played swing or popular dances like the fox trot.  From 1950 to 1964, Lloyd Kibler’s big band from Owen Sound was a regular fixture at Cedar Crescent.

In 1956, an outdoor deck for outdoor dancing. Around this time the Junior Chamber of Commerce hosted a cash bingo event every Monday night throughout the summer, and once a summer CKNX would broadcast their Radio Barn Dance program from the Casino.  The Casino was open nightly, except Sunday.

With the rise of rock and roll’s popularity, McGrath changed the style of music at the dance hall, establishing a weekly Twist contest, in the 1960s.  The contest was so popular the number of dancers of the floor needed to be limited.  In the first year of the competitions, the Casino was designated for the staging of the All-Ontario twist contest championships which saw young dancers coming from as far away as Michigan. Late in 1965 a Go-Go night was introduced.

Around 1960 the Cedar Crescent Casino was renovated to reflect a more modern style.  In 1968 McGrath sold Cedar Crescent to James Albrecht and James Buehlow of Walkerton, who also owned the Kincardine Pavilion.  The dance hall was destroyed by fire in August 1970.  A new pavilion was built in which dances and other community events were held until about 1980 when it was deemed structurally unsound and dismantled.

McKenzie’s pavilion was built in 1921, when William McKenzie came home from the First World War and suggested to his father Murdock, and his brother Tom, that a dance operation would be a good idea.  The building was dual-purpose with the lower level being stalls for cottagers to park their cars in (or boats in the winter), with the dance hall on the upper level.  The dance hall was a jitney operation, with admission being ten cents and five cents for a dance.  A dance was considered two songs.  The dance floor was surrounded by a railing with seating on three sides.  Electricity didn’t reach Oliphant until the 1940s, and the hall was lit using a Delco battery system and were the only electric lights in Oliphant.  Due to the lack of electricity, bands could not use amplifiers or microphones – vocalists used a metal conical megaphone to project their voice.

Upon the death of Murdock McKenzie, William and Tom operated the dance hall as well as the adjacent Maple Leaf General Store.  In the early 1940s they dissolved their partnership, and William continued ownership of McKenzie’s Pavilion.  Thomas took over the store.  At that time William built an annex onto the pavilion called Mac’s Snacks and ran a snack bar for beach goers during the day and food for the dance hall patrons at night.  In 1957 ownership passed to William’s son, Murdoch McKenzie and then to Susan Morris in the 1980s, who operated the building as a small craft store and renamed the building the “Oliphant Pavilion”.

During the 1940s and into the 1950s patronage began to wane as the Sauble Beach Pavilion was in operation.  Eventually the pavilion was only used for the Civic Holiday Regatta Dance, but eventually that was phased out.

The original pavilion in Sauble Beach, built in 1933, was known as the Octagon and was owned by Bob Walker.  In 1945 it was purchased by Wally Scott and Jack Robertson.  Both Wally and Jack were musicians – Wally was a trumpet player who had his own orchestra and was a regular guest at the Cedar Crescent Casino. Wally Scott and His Orchestra opened the hall July 1, 1946, under the new name of Sauble Beach Pavilion.  The original Octagon interior was rustic, so Wally and Jack did some renovations and added a terrazzo floor so couples could dance under the stars.  The original Octagon building was razed in 1950, with a new Sauble Beach Pavilion being built on the same site, and it kept the terrazzo floor.  The pavilion could hold up to 2,500 dancers.

By the 1960s rock bands were being booked, with rock dances happening three times a week.  The pavilion was also used for weekly bingo games, family movies, and Wednesday nights were country music dances. By the 1970s crowds began to drop off, bands were more demanding financially, and the nature of concerts was changing.  Robertson and Scott decided to close the dance pavilion and in 1978 it was demolished.

In 1888, William Knowles built a large tourist home which was called Park House.  Knowles later created, what was known as Knowles Park, by purchasing surrounding property, and building cottages.  In 1918, the business was taken over by William’s son, Russell in 1918, and in the 1920s built a dance pavilion.  Several well-known groups played in Southampton including Guy Lombardo, and Ferde Mowry.  The dance pavilion was used for more than dancing – an article in the March 20th, 1930, edition of the Chesley Enterprise mentions that “basketball has caught on as a proper sport in Southampton and Port Elgin.  Port Elgin has a gymnasium, but the Southampton team plays in the dance pavilion”.  By the late 1930s, Russell’s son, William took over the business and closed the dance pavilion in 1938, to create more rooms.  That part of the hotel, newly renamed Breakers Hotel, was known as the Annex.

In 1922, George Conley of Kincardine felt it was time the town had a dedicated dance hall – until that time dances were held in the agricultural building at Connaught Park.  Conley helped to raise the necessary funds, and even helped design the building.  The pavilion opened during the Old Boys and Girls reunion held July 1923.  The land the pavilion was built on was owned by the town, and owners of the hall needed to lease the land from the Town of Kincardine.

Though Conley held the mortgage on the hall, the first owners and operators were Reuben Whittig and Tony Campbell.  During the summer months, dances were held four nights a week, and was closed for the winter.  On the rare occasion the dance hall was being used for an occasion in the winter, wood and coal stoves were fired up two days before the event to heat the hall.  Within the pavilion was a large light that looked like a moon when lit, and it was customary to turn it on when a song with the word moon in it was played.

Whittig and Campbell continued to own the hall until 1947, when Whittig sold his interest to Clarence Mullen.  By the 1950s Mullen was running the full business.  In 1970 Mullen sold to James Buehlow and James Albrecht, who also owned the Cedar Crescent Casino.  During their ownership, banquets and other events took place in the pavilion.  In 1981, after years of being vacant, the Kincardine Kinsmen purchased the pavilion and began improving the structure.  It was then sold to Jeff Palmateer and Bill Graham.

To explore more about pavilions and dancing in the online collection, Click Here 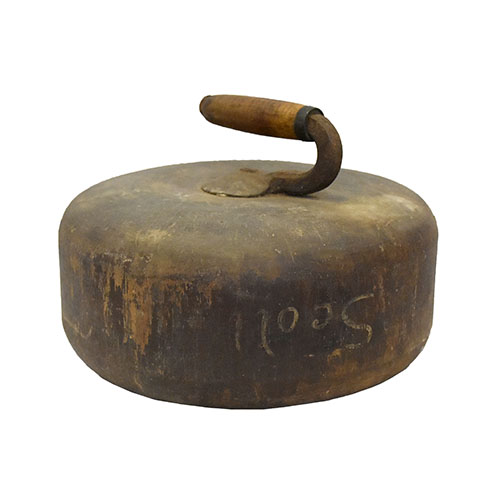 With a large percentage of early settlers being Scots, and good cold winters for ice, it’s no surprise that curling had an early start
Learn More