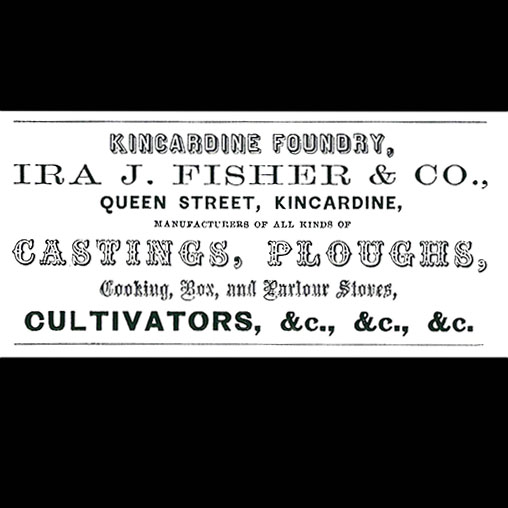 An early industry found in Kincardine is that of Ira J. Fisher & Co., which was established prior to 1867.  Through it’s time it’s been listed several different ways within the Ontario and Bruce County gazetteers and directories, including “iron founders”, “Castings, Ploughs, Cooking, Box and Parlour Stoves, Cultivators, &c. &c. &c”, “makers of engines, boilers, mill machinery, agricultural implements & steel horse collars”, and “agricultural implements & carriage manufacturers”, as the exact nature of the business changed over time.

Born in 1830, Ira Judd Fisher established himself in Bruce County by 1861 and his foundry/machine firm in Kincardine prior to 1867.  Though the nature of what was manufactured changed over time, as well as having different partners in the business, Fisher was the head of the company until he retired ca. 1902.  He continued to live in Kincardine until his death in 1905.

Township, Huron County, where he can be found living with his wife, Mary McCorvie, and working as a blacksmith.  By 1869, Ebenezer was a partner in Ira J. Fisher & Co. and can be found listed as such on the 1869 and 1871 Ontario gazetteer and directories.  He continued to be a member of the business until the early 1880s and moved his family to Goderich where he continued to be a machinist.

During his time in Kincardine, Ebenezer applied for, and received several patents.  The first titled “Machine for chipping Boiler Plate”, was issued in 1872.  In this, he had a partner, Walter Clark, who was also an owner of the patent.  The second called “Machine for Cutting Boiler Plate” was issued February of 1876.  It’s likely this invention, and the machine created by Fisher and Clark were used at Ira J. Fisher & Co., as the firm was listed as making boilers in the 1880 Gazette & Directory of Bruce County.

The next three patents Ebenezer Fisher received, in 1879 and 1880, had John Watson as a patent co-owner.  These pertained to improvements to steel horse collars as well as the process to manufacture them.  The collars were called “The Steel Excelsior Horse Collar”, as per the patent, and it is very likely these were also manufactured at Ira J. Fisher & Co.  Two horse collars with matching patent dates are found in the collection.

Then, as now, the rights to manufacture patented products was an important aspect of business, and in the case of the steel horse collars, Fisher and Watson owned both the design and the manufacturing process, thereby cornering the market.  As Fisher and Watson are listed as the only owner of these patents, it appears they were never sold to Ira J. Fisher & Co., and when Ebenezer left the firm, his patents went with him.

A large part of settlers receiving the Crown patent for their land was the clearing and agricultural working of that land.  Once the land
Learn More