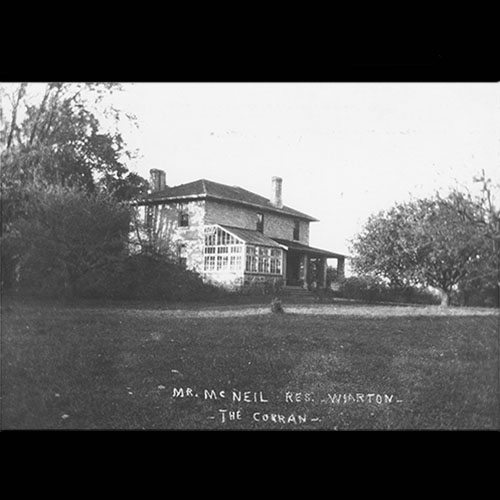 The Corran, built in 1882, was the home of Alexander McNeill and his wife Hester McNeill; Irish aristocrats who moved to Canada in 1872. The mansion and estate that it sat on eventually fell into disrepair. It was the first house to have a telephone and electricity in Bruce County.

The house was made from cut stone walls, and oakwood floors. The interior was decorated by Hester, with mahogany panelled or papered walls.  The original layout was a square with a kitchen, bathroom, dining room, and parlour on the lower floor and two bedrooms, the master suite, and a bathroom on the upper floor.  In 1910 an addition to the house added a library, solarium, larger kitchen and verandah to the lower floor of the house, the old kitchen becoming a scullery (dishwashing room). The additions upstairs were a servants’ quarters with three bedrooms, a dressing room and one large guest bedroom. Once complete there were 17 rooms, and at the estate’s height they employed 15 servants.

The McNeill Estate was best known for its gardens of both flowers and fruits. The Corran was well known for its rose gardens, having over 500 bushes of the flower. There was also a large peony garden visible from the bedroom windows that the pear orchard backed onto. The McNeills often gave their guests a rose when leaving as a sign of hospitality and generosity.  The family had many orchards on site and grew apples, pears, plums, and grapes. The Estate often made the Communion Wine for the English Church in Wiarton and used the leftovers for entertaining guests at the estate.

There were many buildings aside from the house on the estate as well, some records referring to the place as “almost a tiny village.” There were at least two cottages on the land near the house, one for the Lewis family and the other for an old cousin named Escott, who primarily tended the grapevines. There was also an icehouse, a boathouse, a house for Delco generators, a barn, henhouse, grainery, slaughterhouse, and log house.

The assets attached to the estate were also numerous before its downfall. Alexander McNeill owned 300 acres on the Bruce Peninsula where his main estate was, a farm in Paisley where his family lived upon their initial move to Canada, a 32-foot sailboat, one of the largest private collections of books and photos north of Toronto, many carvings, and old weapons, around 40 cattle, 13 horses and later a farm in Alberta. The McNeill family was not lacking in wealth prior Malcom McNeill’s ownership.

McNeill named his estate after his childhood home in Larne, Ireland. Intentionally buying land that reminded him of his old county, attempting to recreate the old house. The name means “point of running into the sea” in Gaelic. The old Corran in Ireland was seized by the admiralty during the Second World War for its strategic position on the coast.

When Alexander died in 1932, the estate was bequeathed to his son Malcolm. The house and gardens had already begun to deteriorate as the groundskeeper died about a year prior. Many people had offered to buy the estate, including poet William W. Campbell, if only to maintain the estate for their old friend Alexander. Malcom later died in 1956 and bequeathed what hadn’t been sold for taxes to a housekeeper named Sally Simmons. Simmons sold the estate to a man named C.H Franklin in 1959. Franklin had plans to restore the estate, but vandals and squatters made upkeep difficult. The property was bought by the Saugeen Conservation Authority in 1976, the same year vandals burned the estate down.

To discover more about the Corran in the online collection, Click Here 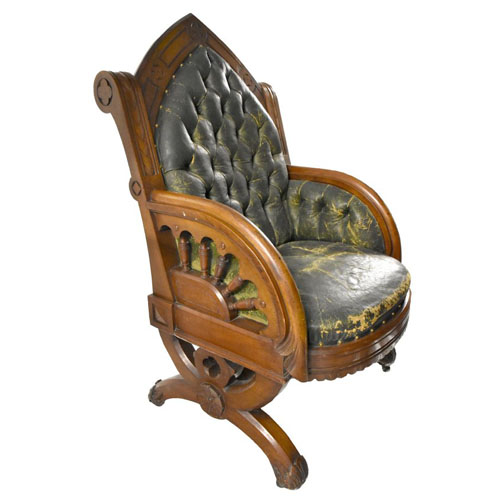 In 1965, the large ornate chair, pictured here, was donated to the museum as part of the Sinclair Estate. According to the Museum’s register,
Learn More

MacKenzie Log Home Can you imagine living in a two2-bedroom home with nine children and two parents?  That is exactly what the MacKenzie family
Learn More