Bruce County has been the home of many newspapers and publications. Several of these are represented within the collection through objects used at the newspaper, photographs, and the publications themselves.

The Bruce Herald was founded by W.T. Cox February 23, 1861. Cox printed the newspaper on Durham Street, Walkerton, Ontario. In 1863, it was purchased by William Brown, who operated the paper until 1883. It was then purchased by partners William Wesley and Louis Kribs. In 1884, Wesley became the paper’s sole proprietor, eventually running the newspaper with his son John Arthur.

John Arthur and William Wesley also owned the Bruce Times, a business they operated since September 1905. In 1912, they eventually amalgamated the Bruce Times and the Bruce Herald to form the Bruce and Herald Times with the first issue published on February 22, 1912. In 1928, the name was changed to the Walkerton Herald-Times.

John Arthur Wesley retired in December 1984 and sold the paper to Goderich Signal Star Publishing Group. The paper was then purchased by Lorne Edy of J.W. Eedy Publishing, proprietor of several newspapers in neighbouring counties. In 1999, the Walkerton Herald-Times was purchased by Metroland Media, which was part of the Toronto Star.

In 2019 the paper was then purchased by Midwestern Newspapers.

In 1899, Heraldi A. Vandusen (d. 1933) purchased the paper from Hammond, expanded its pages from four to eight, and published the paper for over two decades before handing the business over to his son C. Roy Vandusen (d. August 21, 1950) in October 1927. C. Roy Vandusen had worked for his father since March 1908 and was responsible for reporting, advertising, and subscriptions.

In 1944, Vandusen sold the Tara Leader to A.E. Scott and C.L. (Dick) Dentinger. Dentinger assumed the role of publisher and became the paper’s sole proprietor in May 1950. In November 1968, the paper was then sold to W. Kennedy and later to William “Bill” Matheson in 1973.  In March 1981, Bill Matheson sold the Tara Leader, along with The Chesley Enterprise and the Paisley Advocate to the Wiarton Echo Publishing Limited, owned by Harold Wynoch.

Kerry Kitchenham was editor in 1989 when the paper amalgamated with the Paisley Advocate to form The Advocate-Leader published by the Wiarton Echo Publishing Limited.

In December 1990, the Paisley Advocate reverted back to its original name and Tara’s news was incorporated into The Chesley Enterprise.

The first issue of the Royal Dominion News Boy was published on November 8, 1867, by Thomas Fairbairn. He operated his press out of building located at 1 Brownlee Street. The Royal Dominion News Boy was printed every two weeks and contained public meeting reports and advertisements for local businesses. On January 14, 1874, Fairbairn changed the name to the Teeswater News.

On August 17, 1919, G.K. Brown purchased the news and ran the paper out a building on the corner of Clinton and James Street East. On August 15, 1929, Brown sold the paper to Vance Statia who ran the business out of 7 Clinton Street N. In 1941, Statia later sold the paper to Albert “Alby” Worrall, who once worked for Statia. Worrall owned and printed the paper out of 12 Clinton Street S. until his retirement October 30, 1969. The same year Don Thompson, proprietor for the Lucknow Sentinel, purchased the Teeswater News from Worrall and moved the printing of the paper to printing plant Goderich. Though the makeup and printing of the paper was done out of town, a news office was established in the Town Hall. Dorothy MacKenzie managed this office during this time and wrote most of the content for the paper. The paper also published a weekly column called “Around the town with Velda” written by Velda Douglas.

On October 16, 1975, Thompson sold the Teeswater News to Keith Roulston, owner of the Blyth Citizen. Three years later the paper was then sold to Eric Howald, who owned the Kincardine Independent. The printing of the paper was then moved to Durham.

In the spring of 1986, Harry and Carol Helfenstein purchased the Teeswater news from Howald.  The paper first operated out of the Town Hall office and Helfenstein’s farm on Lot 2, Concession 2, Culross Township, and later moved to The Emporium (Thurtell Building). The business expanded to include Agri Business, Money matters, Deals on Wheels, School Days, and Senior Side publications as well as tourist guides and special supplements.

In the 1990s two additional papers were published including the Teeswater Independent operated by Jerry and Linda Collision from 1992 to 1994, and the Teeswater Observer published monthly by Gordon Ripley from 1999 to 2001.

The Wiarton Echo, the Bruce Peninsula’s first newspaper, was founded in July 1879 as a weekly serial by the publishing firm of George Bingham, Colin F. Campbell and Company, with Bingham as editor. It commenced as an independent newspaper, devoted to local news of interest mainly to the residents of the Peninsula. A couple of rivals Encore and Wiarton News competed for a couple of years in the early 1890s.

On July 17, 1885, the Wiarton Echo went from the control of Colin F. Campbell to Solomon W. Cross to become for some period a Reform newspaper.  J.M.K. Anderson became editor and proprietor in January 1894 and later sold the business to A.C. Elliott in November of the same year. Cross later resumed proprietorship of the newspaper by 1896 or 1897, and eventually sold the paper to Alfred Logan, formerly of Pembroke in August 1903.  Logan controlled the paper until August 1923.

In December 1893, a rival weekly newspaper, Wiarton Canadian was founded by Ainsley Megraw who acted as editor. He had previously been publisher of The Paisley Advocate. R.G. Scott later became the proprietor.  The editorial in the first issue of this paper reveals it as Conservative in political affiliation, Protestant and moderately protectionist.

On October 25, 1911, the Wiarton Echo and the Wiarton Canadian amalgamated under the ownership of A. Logan changing its name to Wiarton Canadian Echo as of October 25, 1911, publishing the first issue with that name on November 1, 1911. Following amalgamation, the paper became politically neutral.  The paper was owned by a joint stock company with Alexander McNeill as president.

After A. Logan’s departure in 1923, the Wiarton Canadian Echo was taken over by E.A. Duncan under the Wiarton Echo Publishing Company.  E.A. Duncan was listed as editor and publisher until December 11, 1936. His wife, Mabel Duncan, then edited and published the paper from December 17, 1936 to May 24, 1945. E.M. Duncan Edward Morrow “Ted” Duncan later operated the paper starting on May 31, 1945.

The newspaper changed its name back to The Wiarton Echo on January 1, 1942.

Following other changes of ownership, in or around 2015, The Wiarton Echo became a division of Postmedia Network Inc. 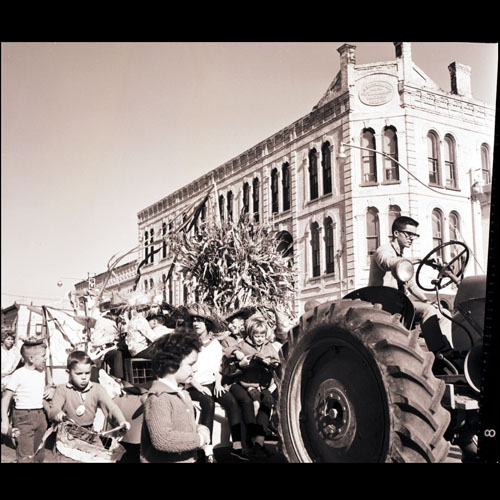 J. Lindsay Thornburn lived in Port Elgin for most of his life and was an avid photographer of many people and places in and around Bruce County for
Learn More