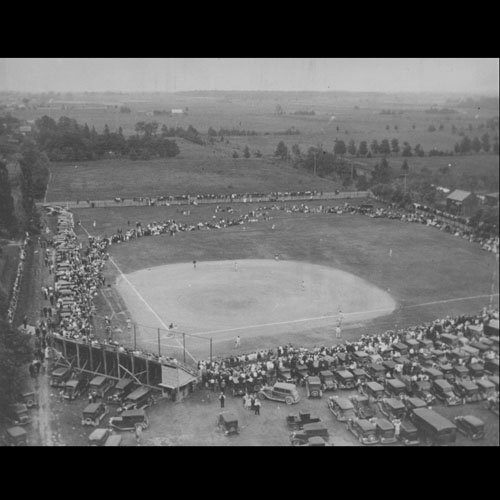 The hardball team, known as the Southampton Fishermen was formed in the early 1930s, and played in the Ontario Baseball Amateur Association.  In the midst of the Great Depression, sports like baseball brought the community together and was a wonderful diversion and way to cope during that difficult time.  Creating a team was the idea of A.F Bowman, one of the owners of the local tannery and lumber business, as he enjoyed the spring training camps in Florida, where he wintered.  Bowman became the major financial backer of the team and was named Honorary President.

Original team members included: Alf Brown as centre field, Harold (Lindy) Indoe as right field, Bert (Dudey) Kugler as left field, Ross Baker as shortstop, John Wain as catcher, Hector Goldsmith as regular pitcher, Ernest (Curley) Aitken as first base, Clarence Schilling as second base and Norman MacKay as third base.  Reuben Schroeder acted as a utility man, or general substitute.  Schilling suffered an injury to his throwing arm and stepped aside for Harvey Krueger.  Over time, players came and went, but most of the original team remained consistent.

Their first game was against Teeswater and the game went into extra innings with no score.  Goldsmith hit a homerun into the adjacent orchard, winning he game.  The team grew quickly in popularity, with team members becoming local celebrities. Game day became an exciting one in Southampton.  Thousands of people would gather to watch the games; many Southampton businesses closed during game time.

From 1931 to 1935 the Southampton Fishermen won the Grey-Bruce Intermediate Baseball League Championship. In 1932 and 1933 they won the Ontario Baseball Association Intermediate “B” Provincial Championship.  Found in the museum’s collection and pictured above is a catcher’s mitt and autographed ball.  These were used during the 1932 championship game, when the Fishermen played against the North Bay Pirates.  The game was scoreless when shortstop Ross Baker hit a grand slam during the 11th inning making the score four to zero.  The Fishermen went on to win the game six to zero.  After the game, the ball was autographed by the team members and coaches to commemorate the victory.

The Southampton Fishermen continued on and off through the rest of the Great Depression and after the Second Word War until 1948 when the team disbanded for the last time.