By the 1950s modern plastics were making their way into our everyday world as a substitute for many different materials.  Plastics had the advantage over other materials due to being cheap to manufacture, and their longevity; two qualities that decades later have caused environmental concerns.  Though relatively modern, plastics got their start during the 19th century, and the one considered to be the parent of modern plastics was celluloid.

Celluloid was invented by John Wesley Hyatt in the late 1860s while attempting to create a synthetic alternative to ivory billiard balls.  By the late 1860s billiards was being played by more than the upper classes and there was concern about the availability of ivory, which at that time the balls were made of.  Hyatt combined camphor with nitrocellulose, which made a mouldable, yet hard substance.  This he called celluloid and had it patented in 1869.  By 1872 Hyatt was producing celluloid commercially.

Because celluloid was colourless, it could be made to have any kind of finish or colour.  It was often used to mimic expensive materials such as ivory and tortoiseshell, allowing the middle class to purchase items that had the look and feel of the upper classes.  It also had the added benefit of slowing down the hunting of animals for their ivory or shells, though at the time animal ethics were not something taken into consideration by most the same way they are today.

Celluloid found success in the creation of ladies’ items such as dresser sets, manicure sets, hair combs and ornaments, jewellery, hatpin heads, and jewellery boxes.  Items made with an ivory finish are often stamped “French Ivory”.  An example of this is the ladies’ dresser and manicure set seen here.

Celluloid wasn’t just popular with the ladies, and there were many men’s items created.  These included collars, cuffs, shirt fronts, shirt studs and collar studs.  At the time there was growth in what could be called “office occupations” which required a particular style of attire.  At the time people only had a few suits of clothes and detachable collars and cuffs of cotton or linen, allowed shirts to be freshened up and changed throughout the work week.  Celluloid collars, shirtfronts, and cuffs became cheaper substitutes for cotton and linen ones.  Celluloid had the advantage of being stain resistant and waterproof, and when dirty could just be rinsed rather than having to go to the laundry.

In the mid-1870s Hyatt invented another process where linen or paper was sandwiched between two pieces of sheet celluloid and then molded into collars, cuffs, and shirt fronts.  These pieces, like the cuff and collar set seen here, had the appearance of fabric with the advantages of being easy to rinse clean.  This style of celluloid items was popular until the 1930s when men’s shirt styles began to change.

By the 1920s celluloid seemed to be on the way out as new early plastics, such as Bakelite, were becoming available. But celluloid had found a niche.  Due to celluloid being colourless and mouldable it became the number one medium for cinema and most of the “golden age of cinema” was filmed on celluloid.  In fact, celluloid became a synonym for movie film.  However, by the 1950s, with advancements in filming technologies, celluloid film was no longer used.

Though it seems like celluloid could be a substitute or a main medium for practically everything, there were drawbacks.  One was flammability due its ingredients, and early theatres had to keep the temperature of their projectors down in order not to set the film afire.  The other is as celluloid ages, its ingredients begin to off-gas.  When kept in the open air, this doesn’t affect much, however if celluloid items are kept in airtight containers, such as a metal film cannister, celluloid will continue to break down and turn into a sludge.  This has contributed to many early films, stored in movie studio warehouses, to be lost.  Celluloid also becomes brittle with time, and many items such as ladies’ hair combs, begin to lose elements such as teeth.

With cinema changing to new styles of films, and all the different, more stable kinds of plastics that came onto the market at the end of the Second World War, celluloid became obsolete, and the new age of plastics began. 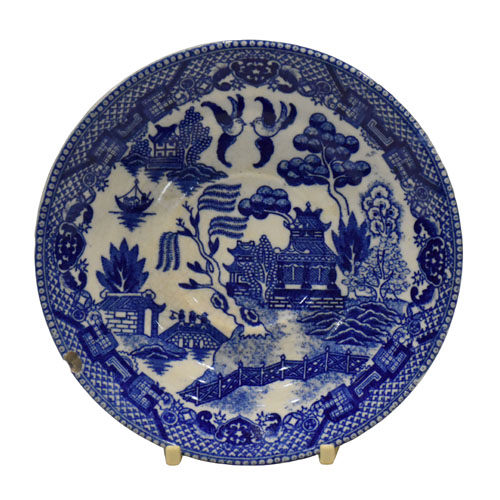 With its bold and contrasting blue and white, the most recognizable pattern in chinaware is the Willow or Blue Willow pattern.  The pattern has
Learn More 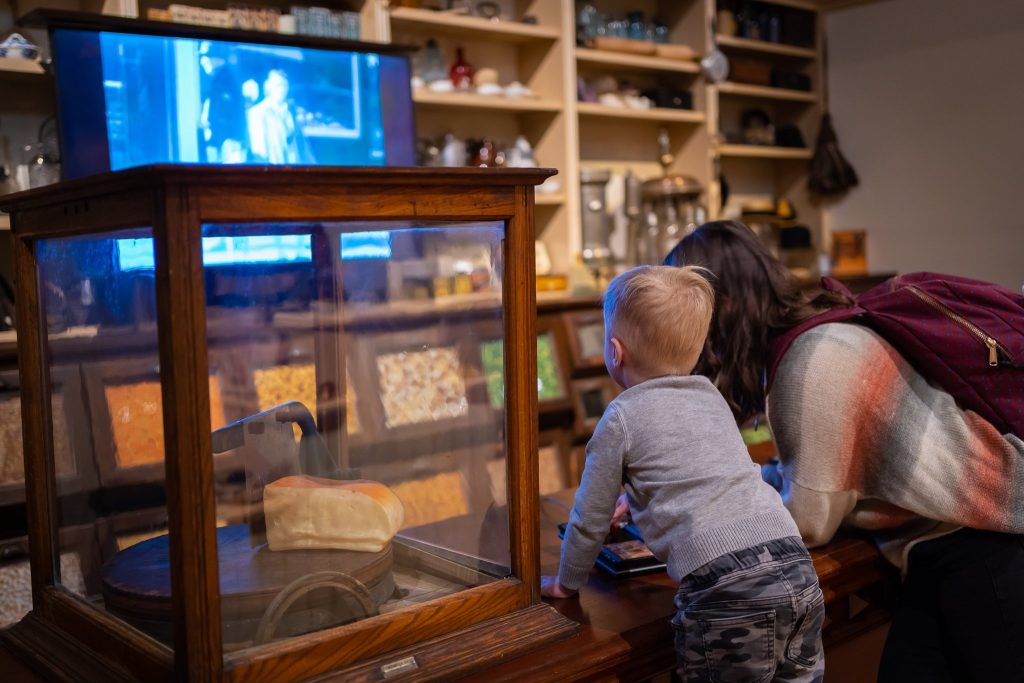 This is the third exhibition of the General Store at the Museum since its inception in 1955. Some of the old favourites are again
Learn More