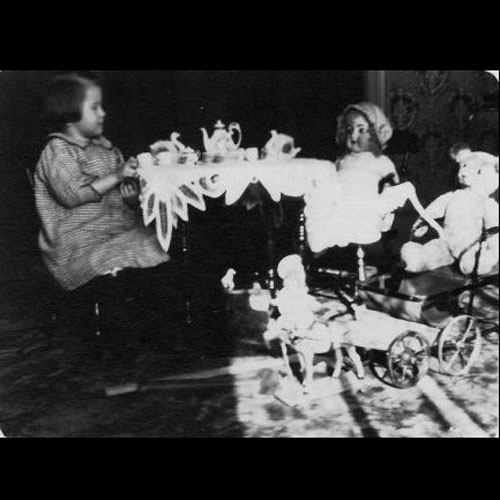 One of the most engaging sections of the museum’s collection is the toy collection.  Saved, sometimes for generations, before being donated to the collection, toys give a glimpse not only into childhood, but show which objects held the most cherished memories for those who donated them.  A large portion of the toy collection is made up of dolls, their accessories, mechanical toys, and outside items such as sleighs.

Seemingly timeless, dolls have always been a popular plaything.  During the Victorian age dolls fell into two categories, fashion dolls and play dolls.  Fashion dolls were popular with women and had a more decorative role.  Play dolls were manufactured in a few different ways and originally were of less quality than their fashion doll counterparts.

Some had heads and limbs made from papier maché, which were then painted by hand.  Some manufacturers used papier maché as a base and then dipped the heads into wax before being painted.  This allowed for hair to be place directly into the head.  Other dolls had their heads and limbs created from ceramic or porcelain.  At this time doll bodies were made from cloth and were stuffed with hair, sawdust, or other durable yet soft mediums.

To appeal to different economic classes, one could purchase heads and limbs which were then attached to homemade bodies, or a doll in its entirety.  During the Victorian era and well into the 20th Century, Germany was a large manufacturer and exporter of ceramic/porcelain dolls.

In the mid-nineteenth century when industrial processes allowed for faster, cheaper, and light metal manufacture of clock works and gear mechanisms, mechanical toys rose to popularity in both Europe and North America.  Mass production allowed mechanical toys to be dispersed to most economic classes, rather than being toys for only the upper class.  As child’s playthings, mechanical toys were often fanciful in subject matter, and were made of either iron or tin.

Within the collection are several mechanical toys including mechanical banks.  Though often thought to be simple, mechanical toys use a variety of scientific principles to give them motion.  Wind-up toys, like the “Mechanical Dude” from the 1912 Eaton’s catalogue seen in the slide show, work using a system of gear wheels attached to a winding mechanism.  The principles used in mechanical toys are still used in some toys today.

We can see from photos in the Archives that children spent leisure time both inside and outside and toys are featured in several photos.  The most popular outside toys seen are sleighs or sleds.  Sleighs were shaped like their much large horse-drawn counterparts and were made to be pulled rather than pushed.  Sleds were self-propelled.  The collection boasts several children sleighs and sleds that span over a wide range of time from the 1870s through the 1930s, showing just how timeless they really are.

To discover more toys in the online collection, Click Here

The Doll, the Myth, the Legend

A popular item throughout the Museum’s time has been Jerry, the ventriloquist dummy.  Jerry came to the museum on loan in 1957, before being
Learn More