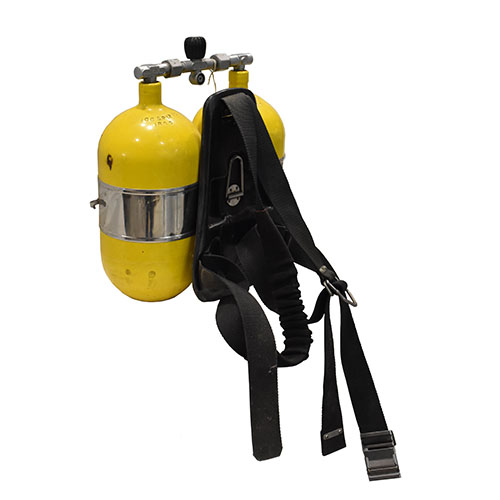 After the Second World War, the technology used by military divers, often known as Frogmen, continued to be improved upon and by the 1960s equipment had been created that allowed non-military personnel to explore what lies beneath the waves, and the sport, known as SCUBA diving, was born.

Known for its clear cold waters, many shipwrecks, and geological features to explore, Tobermory and the surrounding area has been a popular place for SCUBA diving since recreational diving became popular and will continue to be draw well into the future.  With the rise of recreational diving, as with many other activities, souvenir taking became a practice which could have the effect of stripping shipwrecks of clues to their identities.  In “A Diver’s Guide to Georgian Bay”, published in 1979, author Arthur Amos states “The worst and most recent example of this has been the stripping of an unidentified vessel at Hope Island.  Whatever historic and archaeological value it may have had was virtually destroyed within two years of its discovery in 1975.”.  The author also warns “…if present attitudes remain unchanged, the next generation of divers will find little to see, explore or photograph underwater.”

The early 1970s saw the creation of Fathom Five Provincial Park, Canada’s first underwater park within the Parks system.  Fathom Five encompasses over 20 shipwrecks, which preserves them as important archaeological sites telling the stories of Great Lakes marine history, navigation technology, and the perils of waterway navigation.  The creation of Fathom Five Provincial Park effectively allowed the wrecks within its borders to be protected so future generations of divers do have much to see, explore and photograph underwater.  In 1987, as part of the negotiations for the creation of Bruce Peninsula National Park, the park was given to the Federal Government and became Fathom Five National Marine Park.

Due to the stress it puts upon the body, SCUBA diving is a sport fraught with dangers that have serious health consequences.  In the 1960s and early 1970s with the influx of recreational divers, there was an influx of SCUBA accidents and the need for proper facilities to treat these emergencies in a timely manner was critical.  With the goal of reducing the amount of diving injuries, including fatalities, a grant from the Ministry of Natural Resources was given for the creation of the Tobermory Hyperbaric Facility, which opened its doors in 1976.

The hyperbaric chamber treats several diving injuries such as decompression sickness, also known as “The Bends”, and nitrogen narcosis, known as “The Martini Effect”.  The facility has also offered educational courses related to diving injuries.  With the creation of newer technology in diving equipment, diver education, and other safety measures such as registering with the park prior to diving, using dive flags, diving tables/computers, etc. the rates of SCUBA injuries have been greatly reduced since the early days of diving on the Bruce.

While recreational divers flocked to Tobermory’s waters, technical divers were elsewhere within Bruce’s waters exploring, often with the goal of documenting and identifying shipwrecks.  These divers, while documenting also recovered items which were given to local museums for preservation.

One such diver was Robert (Bob) Stephenson (1920-1999).  Bob dove throughout Ontario and did lots of work in the Southampton area.  Diving at a time when recreational SCUBA technology was in its infancy, the museum has within its collection several items that were made by Bob.  These include and underwater camera housing and another is a dive watch. Included in the collection is a home-made dive sled, seen here.  This sled was towed by boat while Bob rode submerged.  A little button near the front of the sled is for a bell which would ring on the surface.  Using a series of bells as signals, Bob could communicate with the boat and give directions such as stop, faster, diving and ascend.

Another such person was Arthur Amo (1934-2020).  Arthur, a long-time resident of Tobermory, was an avocational archaeologist who spent nearly 50 years researching and conducting field work on Bruce County shipwrecks, those on the Great Lakes and beyond.  He was also a founding member of the Ontario Marine Heritage Committee, a committee dedicated to researching, interpreting, and preserving Ontario’s marine history in 1975.  Amo’s research materials became the first donation to the museum’s new Marine History and Underwater Archaeology Research Centre.  For more information about this collection, Click Here

To explore all things marine, including SCUBA Diving, in the online collection, Click Here

The Wreck of the Francis P. Ritchie

Considered to be the last major wreck at Southampton, the Francis P. Ritchie met its fate August 29, 1931.  The ship, a wooden schooner,
Learn More